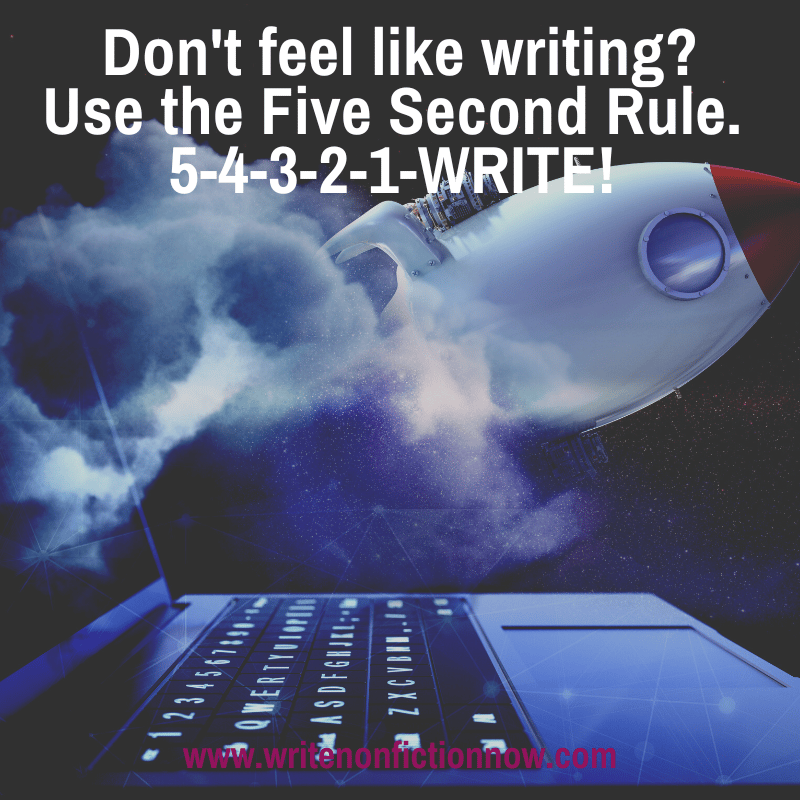 I know you love writing, but I bet you have days when you just don’t feel like writing, and so you don’t. After all, all writers have off days, right? Or maybe you keep telling yourself you’ll write but find reasons not to do so. Most writers procrastinate sometimes, right?

Off days and procrastination might be facts of life for some writers but not for productive ones. They write even when they don’t feel like it or find themselves inclined to do something else instead.

To write consistently, you need a strategy that gets you writing every time. And I know one that is proven to work for anyone and anything, including writing.

Apply the 5 Second Rule. (No, not the one about eating food after it falls on the ground.) Launch yourself into a writing period by saying or thinking, “5–4–3–2–1-GO!” Then write.

Don’t discount this strategy because it sounds too simple. The rule will help you go from I don’t feel like writing to writing or from Maybe I’ll eat (fold laundry, watch the news, or whatever your preferred procrastination method) before I write to I’ll write first. It will transform you from an unproductive to a productive writer.

Within five seconds of thinking, “I really should write today (or now),” you must take action. Put your fingers on the keyboard and write. Don’t wait until six seconds, two minutes, or an hour have passed to write. If you do, it’s improbable you’ll compose a word.

Off days and procrastination might be facts of life for some writers but not for productive ones.

What Happens if You Wait Too Long to Start Writing

After those five seconds are up, your brain begins doing what it does naturally—providing lots of reasons and excuses for not writing. You’ve probably heard them all, including:

But if you move to your desk or, better yet, put your fingers on the keyboard within five seconds of thinking you “should write” or “It’s time to write,” you don’t give your mind a chance to provide reasons and excuses for not writing. Therefore, you will write.

Within five seconds of thinking, “I really should write today (or now),” you must take action. Put your fingers on the keyboard and write.

The Five-Second Rule for Writers

The five-second rule is not a strategy I devised. It was created by Mel Robbins, author of The Five Second Rule. Robbins claims the rule is the secret to changing anything about your life.

You can use it to break any bad habit, interrupt self-doubt and negative self-talk, and push yourself to take the actions that will change your life—like writing daily no matter what. Using this simple rule helps you increase motivation, decrease self-doubt, and take action toward your writing goals.

Robbins, a lawyer, explains the rule this way: “If you have an instinct to act on a goal, you must physically move within five seconds, or your brain will kill it. The moment you feel an instinct or a desire to act on a goal or a commitment, use the rule.”

And how do you use it? “When you feel yourself hesitate before doing something that you know you should do, count 5–4–3–2–1-GO and move towards action,” Robbins explains.

Robbins began to use the five-second rule as a way of getting out of bed at a time that was both difficult for her and her family. Inspired by a rocket launch she noticed on TV, the process is simple and mimics such a launch. Simply count backward from five to one and immediately launch yourself into action at the end of the count—before the mind creates a reason not to act.

You know the saying, “He who hesitates is lost.” Well, the same goes for writers. If you hesitate, you won’t write…you will get lost in all the reasons why you should do something—anything—else. Your brain will make sure of that.

Robbins says, “Hesitation is the kiss of death. You might hesitate for just a nanosecond, but that’s all it takes. That one small hesitation triggers a mental system that’s designed to stop you. And it happens in less than—you guessed it—five seconds.”

So, if you aren’t writing as consistently as you’d like (or at all) or too often you don’t write because you don’t feel inspired, motivated, or in the mood, stop hesitating. As soon as you think about writing, use the rule. Count backward and then take action.

Make 5–4–3–2–1 WRITE! your new strategy. And watch your writing productivity and consistency blast off like a rocket.

Have you tried the 5 Second Rule to get yourself to write? I’d love to know if it worked for you, so tell me in a comment below. And please share this post with a friend or on social media. Also, if you need some support writing consistently and productively, reach out” or join the Nonfiction Writers’ University for group Author Coaching. 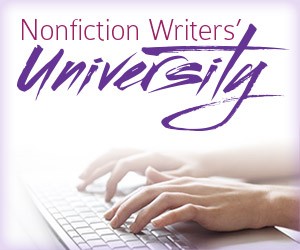 Would you like to write and publish nonfiction work, like articles, blog posts, books, or reports…and become a successful author? Join the Nonfiction Writers’ University. Get the basic education you need and the group Author Coaching to help you succeed as a nonfiction writer.

Enjoy a 30-day trial membership for only $1. If you’ve felt the desire to get coached and be supported as you pursue authorship, this program is for you. Participate in monthly group Author Coaching sessions and gain access to an extensive archive of writing and publishing resources.

« How To Consistently Write 1,000 Words Per Day
2 Ways to Focus on Learning Styles when Writing Your Self-Help Book »