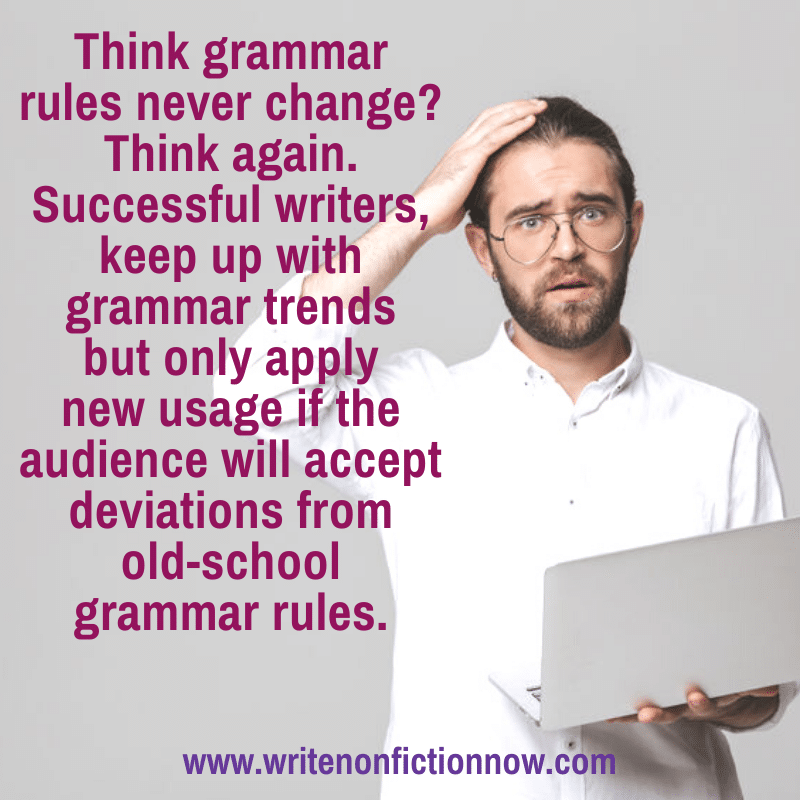 I’m a sticker for old-school grammar rules, but times change, and so have the rules I write by. In today’s post, Beth Bauer (@JourneyofBethB), discusses several grammar rules that have changed over the years.

Have you ever sat down to read a new book, and, just a few pages in, you notice the writing seems grammatically incorrect? Many old-school grammar rules have changed over time—much to the dismay of stickler grammarians. Modern-day writers broke them so often that the broken rules have become common usage.

A dear friend of mine has been a professional writer for decades and helps me edit my books. Recently, we got into a heavy discussion about several grammar topics and whether old-school rules—those taught in grammar books and grade school—still apply to modern-day writing. At what point in time does non-standard sentence construction become widely accepted or even the new standard?

Like it or not, these are some old-school English grammar rules that may no longer apply to modern-day writing. Let’s look at a few.

Never End a Sentence with a Preposition

The English language has approximately 150 prepositions, and you were likely taught never to place one at the end of a sentence. You know what I’m talking about.

My last sentence at one time would have been considered unacceptable. Even my grammar checker alerted me as I wrote the sentence that I needed to correct the preposition at its end.

Still, it’s an old-school grammar rule that lost its significance years ago. Did you see what I did there? Continuing to follow this outdated rule can result in some painfully awkward sentences, so don’t even try.

Don’t Start a Sentence with a Conjunction

A conjunction connects clauses or sentences or coordinates words in the same clause. Most of us were taught to only use conjunctions, like and, but, or if, as connectors.

Here is a little background on this old grammar rule. Teachers during the 19th century were irritated with students’ common use of conjunctions to begin a new sentence. To correct this tendency, they created a standard rule against it. But, over time, its use has faded and is no longer relevant.

Like it or not, these are some old-school English grammar rules that may no longer apply to modern-day writing.

When is this acceptable? In nonformal writing (such as this). If you’re writing a college thesis, cover letter, or white paper, you may want to comply with the old standard.

Otherwise, go for it. Why not? It’s the new thing.

Never Use the Word “Who” When You Should Use “Whom”

The use of the word “whom” is formal and fell out of practice long ago. Most people don’t even know how to use it, which results in plenty of awkward sentences.

Can you imagine if the famous song lyric from the movie Ghost Busters—”Who you gonna call?”—was instead, “Whom are you going to call?” It’s not nearly as catchy.

When you find yourself confused over who vs. whom in one of your sentences, it’s often best to rephrase the sentence altogether.

When using modern language and abandoning old grammar rules, always consider your audience and how they will respond to your use of language.

Don’t Use “They” as a Singular Pronoun

You’ve likely been taught never to use “he/she” in a sentence. Ask your editor what he/she think of this rule. Just notice how awkward that last sentence feels.

Ask them, and see what they say, has a smoother flow, even though we are talking about a singular individual. (My sentence said, “ask your editor,” not “ask your editors.”)

Always defaulting to “he” as a pronoun sounds sexist, and flipping between “he” and “she” is confusing. Using “he/she” breaks up a sentence’s flow and becomes annoying to the audience.

“They” and “them” are gender-neutral, which is one reason using these plural pronouns has become more standard practice. We also use them as singular pronouns in everyday speech.

An infinitive is the uninflected form of a verb used with to—for example, to walk, to jump, to speak. A split infinitive is created by placing an adverb or adverbial phrase between the to and the verb. You might recall this famous split infinitive from Star Trek: “to boldly go where no man has gone.”

This rule arose out of Latin sentence construction centuries ago. In Latin, an infinitive is a single word, so it can’t be split. But in English, two-word infinitives can be separated and still make sense and even be more impactful. If written in the old Latin rule, the beloved phrase from Star Trek would be, “To go boldly where no man has gone before.” This sentence structure doesn’t have the same effect as the one we have come to know and love.

When using modern language and abandoning old grammar rules, always consider your audience and how they will respond to your use of language. If you write for millennials, it’s probably best to use modern-day writing practices. However, if you write for an older audience, academia, or more formal situations, it might be wise to still stick with old-school grammar rules.

Beth Bauer is a freelance writer, travel blogger, yoga instructor, and entrepreneur currently working on her third novel. She has traveled to over 20 countries in just the last two years and enjoys life as a digital nomad. She is originally from the Pacific Northwest of the U.S.A., and when she’s home lives on the Long Beach Peninsula with her dog, Ozzie.

Do you want to learn more about becoming a nonfiction author? Check out the Nonfiction Writers’ University. Get the education and coaching to help you succeed as a nonfiction writer. Take advantage of monthly live group author coaching, and gain access to an extensive archive of educational resources, like interviews with experts, challenges, homework assignments, courses, and ebooks. If you’ve wanted one place to go for all your nonfiction writing and publishing needs, this is it. And if you’ve wished you could purchase Nina Amir’s best courses or could hire her as your author coach, now you can…for a small monthly investment. Enjoy a 30-day trial membership for only $1.

« How to Understand Your Ebook Distribution Options
How to Increase Your Writing Consistency, Productivity, and Performance »